"Koi pyar ki dekhe jadugari, Gulfam ko mil gayi Sabz Pari", I was listening to this song for the umpteenth time a year or two ago when I found myself wondering about Gulfam and Sabz Pari. I had never heard about this romantic couple ever, were they some kind of legendary lovers? Like Laila and Majnu, Shirin and Farhad, Heer and Ranjha? On an impulse I googled them, thinking I would be led to some story about star crossed lovers. I was instead directed to a play called Indra Sabha often performed in the court of Wajid Ali Shah. I got a bit jumbled up at this point. I got the impression that the play was written by the erstwhile Nawab of Oudh. With this faulty information, it was no surprise that my attempts to look up any more information about this play failed.

Two months ago, on Twitter, I read a tweet about a play by Amanat Lakhnavi called Inder Sabha that set my antenna abuzz. This was just what I had been chasing, and I lost no time in asking the tweeter if the book was available anywhere. I got a reply that it was possible as it had been performed on stage in German language. This time round, armed with the name of the author and the modified spelling of his work, I was able to locate the book easily. To my joy, it was available in Hindi script for a mere Rs.90/- at amazon.in. A quick order followed, and in a few days time, the book was in my hands.

This is how information spreads. A popular work of art (literature, poetry or painting) remains in the mind of another artist and gets a mention in his work. This is how esoteric works of poets like Rumi, Bulle Shah, Waris Shah, Amir Khusro and Amanat Lakhnavi have been handed down the generations. Sahir Ludhianvi and Gulzar have famously borrowed poetry from Ghalib and Khusro. The use of the names of Gulfam and Sabz Pari by Shakeel Badayuni in 1960 led me to this gem of a book in 2015. I hope my poor attempt at describing Inder Sabha will lead discerning readers to this book.

It is a slim book of 74 pages, 13 of which are reserved for the introduction, index and such. The drama itself is spread out in 60 pages. The story is about the grand court of Raja Inder in Heaven where lovely fairies dance and sing. No mortal is allowed to enjoy the beauties of this festival.

There are four celestial Apsaras who perform at the gathering - Sabha - of Raja Inder. They are Pukhraj Pari, Neelam Pari, Lal Pari and Sabz Pari. Each Pari is introduced to the assembly by a verse. She is attired according to her name, and is, of course, very beautiful. She sings a ghazal, a holi a chhand, a thumri and several songs. We presume she dances as well.

Sabz Pari is the last of the Apsaras to come on the stage, and the prettiest. She happens to see a mortal prince called Gulfam. She is smitten instantly by his beauty and has him abducted to her palace. Gulfam is initially confused by the goings on, but when he learns she is a Pari, begs her to be allowed to watch the festivities. A member of the court complains to Raja Inder about the mortal intruder, and Sabz Pari's hand in it. For her transgression, Sabz Pari is banished and Gulfam is thrown in jail. Can Sabz Pari save Gulfam? Will she be accepted back and allowed to consort with a mortal? How can she put her case forward to the king when she cannot appear before him?

As for the content of the musical, between them, the four Paris sing 31 ghazals, 9 thumris, 4 holis, 2 chaubolas, 5 chhands and 15 songs. It is a musical opus, no less. The poetry is not always top class but it is always charming. The language is Hindi-Urdu, hence it is not difficult for a person with a little knowledge of Urdu to understand most of it. Some of the Urdu words are translated at the end of the page for our ready reference. At some point of time, in my opinion, the author got a little carried away by the task at hand and failed to provide meanings to the difficult Urdu words. These can be checked online easily, thanks to the plethora of Urdu dictionaries on the Internet.

Amanat Lakhnavi was a contemporary of Wajid Ali Shah. He started writing poetry at the age of nine years. When he was young, an illness took away his ability to speak. He regained his speech much later during a visit to Iraq, but he was plagued with a stutter. His speech impediment turned him into a recluse. A friend of his, Haji Mirza Abid Ali 'Ibadat', was "आशिके कलामे अमानत" (lover of Amanat's poetry). He advised Amanat to get out of his depression by composing a musical which would be a source of joy to the viewers. This set Amanat on to creating Inder Sabha. It was performed first in 1853 in the court of Wajid Ali Shah. Thenceforth, it was performed annually in his court. Later, it was performed for common people as well and became so popular that several theater groups performed it in various places. After his untimely death, his son compiled his works into a book called 'Amanat'.

I am led to believe that the grand movie Indrasabha (1932) - which holds the record for highest number of songs ever (69) - was also based on this book. The print of the movie is perhaps destroyed. It is not available either on dvd or youtube. A sad loss.

This book has been edited by Dr. Krishan Dev Jhari. He has also written a very entertaining and an informative foreword to it. We have to thank him for bringing a treasure like this to our notice. Drama was a vocal tradition in the days of yore. We are very fortunate that it has survived the vagaries of time and appeared in print. Dr. Jhari has edited several books in Hindi, but there is no further information available about him. 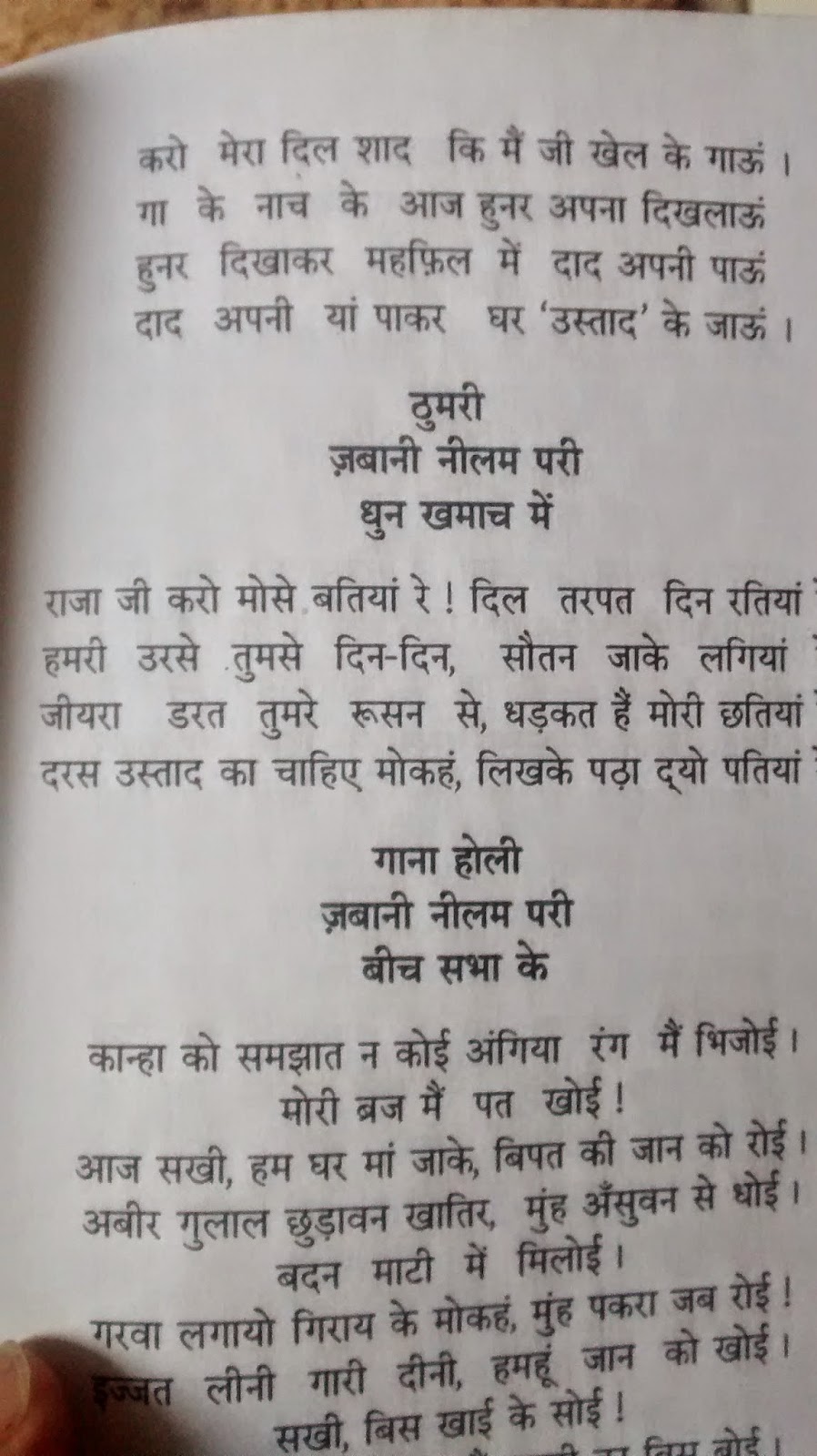 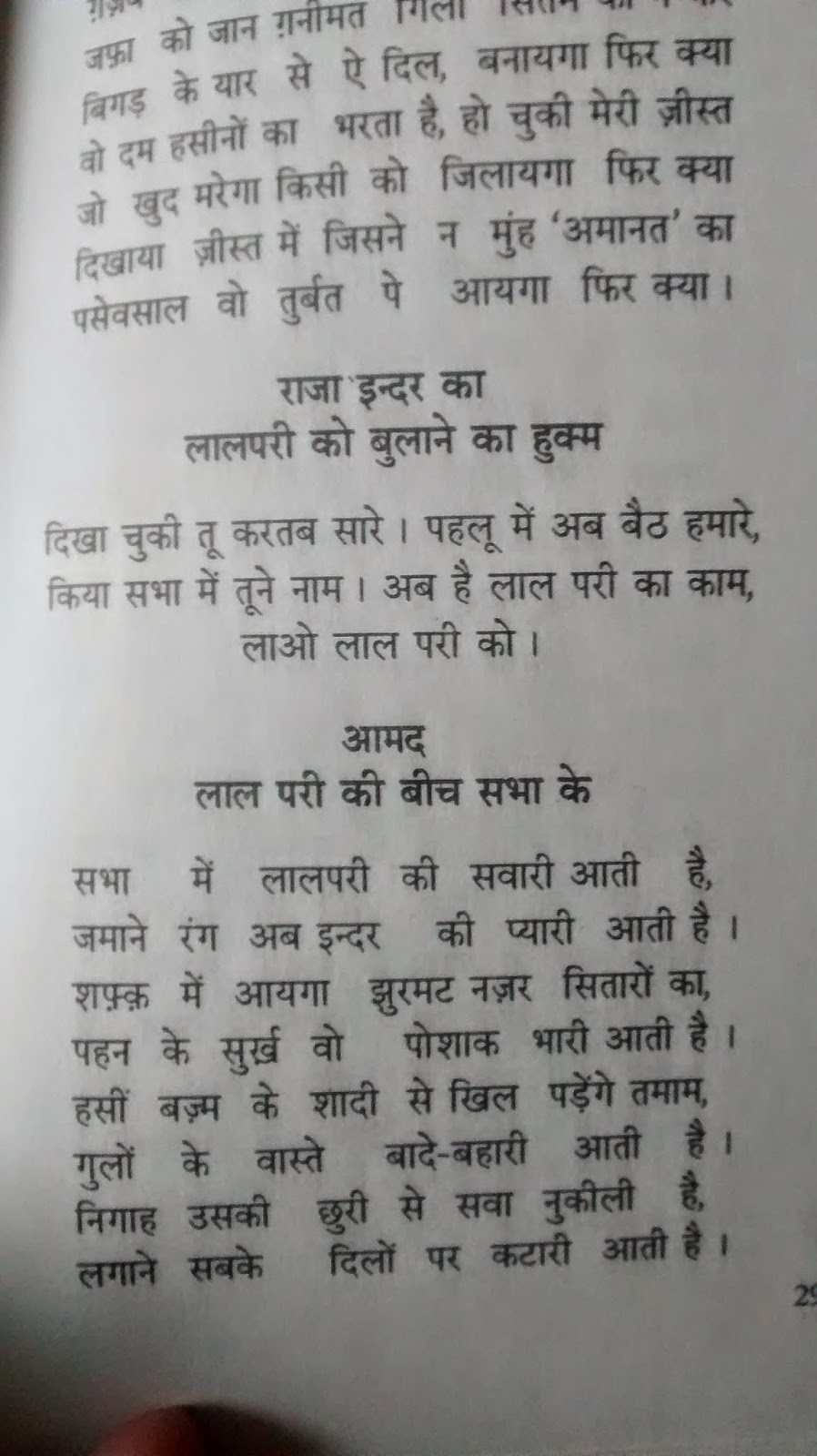 View all my reviews
Posted by Ava at 5:18 am

Thanks for a good review of this book thus bringing to the notice of the interested persons like me. It was only the last week, I came to know about Amanat Lucknavi and his work 'Inder Sabha' through www.rekhta.com. I had been looking for this book, albeit for a different reason. I have feeling that ghazals in Amanat Luckhnavi's Inder Sabha may have been used in some of the early talkies including 'Inder Sabha' (1932). I have placed the order for the book.

By the way, the word 'gulfaam'(rose coloured flower,rose faced boy) as a noun had been used by earlier Urdu poets like Mirza Ghalib and Nazeer Allahabadi before Amanat Lucknawi used as a name. 'Sabz pari' (green angel) has been rarely used by Urdu poets though 'Sabz' has been used more commonly.

Interestingly, "inder Sabha' has become a reference point for some of the later Urdu poets in their she'rs/nazms. A few examples:

Thank you for your kind words. I was so thrilled to be able to read this magnificent book. I am awed by the imaginative poet who has crafted this tale.

Were you able to find a print of the movie Indra Sabha? I looked everywhere, but it does not seem to be available. I remember some clips of it being shown in several shows about movies.

Thank you for your inputs.

Thank you, Neeta. I hope you enjoyed the post.