I got curious about this book after I read about Slumdog Millionaire, an award winning movie by Danny Boyle. It was based on this book by Vikas Swarup.

Ram Mohammed Thomas is an orphan, abandoned as a newborn by his mother outside an orphanage. He is lucky to fall into the hands of a priest who is the best father he could have had. But an unfortunate chain of events force him to lead an eclectic life, trying to survive the misfortunes that befall him.  On a positive side, his experiences give him enough knowledge to be able to win the biggest prize ever in a quiz show. 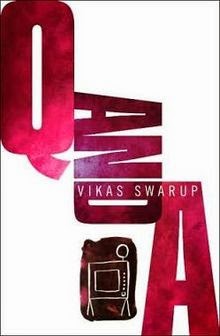 The format of the story is interesting. Right at the first, Ram Mohammad is arrested for cheating in the quiz show he has just finished filming. The show has not been aired yet. He is bailed out by a young lawyer, Smita, who is willing to save his skin if he can prove he did not cheat. Ram tackles each question and shows Smita how his an experience at some stage in his life helped him learn an answer to each question. The story is meaty and goes forward quite easily.

What makes the book so pedestrian is the lacklustre style. It is the most un-beautiful language I have read in recent times. Even some crappy chicklit I read a while back was decently styled compared to this. I wish Vikas Swarup had taken some help, I don't think he lacked any. Surely it was his clout as an Ambassador to wherever that helped him in getting his book published in the first place.

Apart from the crappy language, at times the episodes seem a bit jerky, but I suspect, had the style been better, the jerkiness would have been ironed out.

It is a pity, because the idea is good. Ram Mohammed Thomas is an everyman sort of a fellow. His nomadic lifestyle, and exposure to different homes help him absorb knowledge. For instance, it is from his stint in the home of an Ambassador that he learns the Australian language, and also the meaning of the term persona non grata. It is from his stint as a servant of a famous but faded film star that he learns which movie won her the national award for best actress.

Now what remains to be seen is Slumdog Millionaire and if it is any good.
Posted by Ava at 7:58 am 15 comments:

The most recommended books of 2008

The Bible by multiple authors (4 recommendations)
yes, the language is good. but gets tiresome at times with all the begats.

Catch-22 by Joseph Heller (3 recommendations) :
I tried to read this.. couldnt !

For Whom the Bell Tolls by Ernest Hemingway (3 recommendations) :
I saw the movie

How to Win Friends and Influence People by Dale Carnegie (3 recommendations) :
ew

On the Origin of Species by Charles Darwin (3 recommendations) :
x

The Lord of the Rings by J.R.R. Tolkien (3 recommendations) :
One of my most frequently read books, and one of the most beloved.

Crime and Punishment by Fyodor Dostoyevsky (2 recommendations)
oh yes.. its a classic.by an old master

David Copperfield by Charles Dickens (2 recommendations)
wo.. of course, a fab book

Do Androids Dream of Electric Sheep? by Philip K. Dick (2 reccos)
This I can try

Siddhartha by Hermann Hesse (2 recommendations)
of course, a slim book. very hippie. anyone who was living in the 70s will remember the pics of a resplendent and bare breasted Simi Garewal

The Art Of War by Sun Tzu (2 recommendations)
x

The Catcher in the Rye by J.D. Salinger (2 recommendations)
Yes, read

The Divine Comedy by Dante Alighieri (2 recommendations)
no, alas

The Grapes of Wrath by John Steinbeck (2 recommendations)
x

The Histories by Herodotus (2 recommendations)
x

The Hitchhiker’s Guide to the Galaxy by Douglas Adams (2 recommendations)
Not to be missed. A must read by any human who plans to hitchhike through the galaxy in near future.

The Hobbit by J.R.R. Tolkien (2 recommendations)
A prequel to the Lord of the Rings, and very wonderful, warmer than LOTR

The Iliad and Odyssey by Homer (2 recommendations)
in bits n pieces.. again.. when an ancient master recites, you can but listen in awe.

To Kill a Mockingbird by Harper Lee (2 recommendations)
Oh.. absolutely. The books is like a bible.

Ulysses by James Joyce (2 recommendations)
noo, has anyone tried stream of conciousness literature?

Walden by Henry David Thoreau (2 recommendations)
no but i can try.. seeing its thoreau

War and Peace by Leo Tolstoy (2 recommendations)
oh yes.. absolutely the best book ever, second only to Anna Karenina

Thanks to Smita for forwarding me this list. Any of my readers are welcome to make their additions and leave a link please. or discuss in the comments section - anytime.. even if the post is years late.
Posted by Ava at 4:58 am 38 comments: