Bae Suah - Nowhere To Be Found

The trend in publishing these days is novellas.  Short novels, tad longer than a short story are found to be the best reading for time starved people of today.  In the hands of wrong people such Book Shots (as the novellas are sometimes called) can go horribly wrong.  In the hands of right authors it can become a potent weapon.

I have read two short books today. One was The Vegetarian by Han Kang, not a very long novel. This is my second read, this novella Nowhere to Be Found by Bae Suah.

The girl in the story is in her early twenties, a college graduate, but a drifter.  She is not able to make any headway in her career by two seeming reasons. One, she does not seem to have any particular ambition; Two, she has to work hard just to put food on the table.  Her brother is a low paid janitor. Her mother is a nurse who cannot work because she is an alcoholic. Her younger sister is in school and her father is in jail.

Even so, while working in mind numbing jobs, she observes everything acutely.  She notices that the people she is in touch with now will not have any memory of her in a few years time, while there are people that she runs into on the subway who will become known to her in future.  This same fluidity is incorporated in the story when she goes to visit a 'sort of' boyfriend at his military base one day.  Due to a mix up at the reception, she is led off on a wild goose chase after her boyfriend through a bleak cold countryside.  All the time, she was carrying a bag of chicken that the boyfriend's mother had prepared.

All through the bad day, she gathers hatred for chicken, and hatred for the kind of life her boyfriend's family leads.  The day becomes a benchmark for all things horrid for her.  A day that she revisits in her mind for a long time.  Yet that day was transitional for her. She is no longer in touch with her boyfriend of the day.  All she has are the feelings she gathered.

Through disjointed narrative, Bae Suah takes us into a journey through a girl's mind.  A girl who is ordinary on the outside, but fiercely independent and strong.

The prose is sharp as knife and does not make any allowances for its readers.  It seeks neither to explain nor describe.

The story was nominated for PEN Translation Prize for the year 2015.  Bae Suah is an acclaimed writer from South Korea.
Posted by Ava at 9:26 am 1 comment: 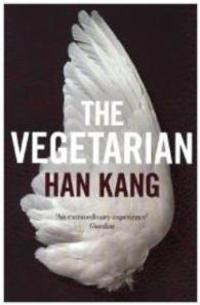 This book won the Man Booker International Prize for the year 2016.

We go through life expecting it to run smoothly and on predictable lines. We are born, we go to school, find a job, marry, have children and in turn, watch our children go through the same cycle. What if the life throws us a curveball? How do we react?

Young-hye dreams of a violent massacre of life which suddenly turns her off meat.  She throws out all eggs and meats out of her house and refuses to cook or eat them.  Her husband is immediately affected as he is fond of his non-vegetarian diet.  He feels his wife is being unreasonable and stubborn.  He is supported by Young-hye's parents who try to talk her out of her newfound vegetarianism.

Her parents decide to convince Young-hye again when they meet at a dinner at her sister's place. When their pleas fall on deaf ears, her father loses his temper and tries to force-feed some meat to Young-hye.  This pushes her over the edge and she tries to commit suicide.  This is the watershed moment to which other family members reactin  different ways.

The different voices of the narrators make us feel differently about the affliction of Young-hye. At the end of it we realize that without deep love there can be no understanding.  In-hye has to go to the core of herself to understand what Young-hye is feeling.

The novel left me feeling emotionally wrung out.   It has been translated from Korean to English by Deborah Smith.  It is an excellent translation.  The language is spare and evocative. The author does not fear to look deep within the minds of her characters and lay them bare for us. As can be seen from the example here.

This is the first novel I have read by a Korean author. Previous to this, The only Far-Eastern novelists I have read before this are Japanese authors Haruki Murakami and Banana Yoshimoto whose works also dabble in the internal workings of the mind.  There is such a connection between these authors and Kafka.  If you get goosebumps from reading about Gregor Samsa, then The Vegetarian should be a mandatory read for you.