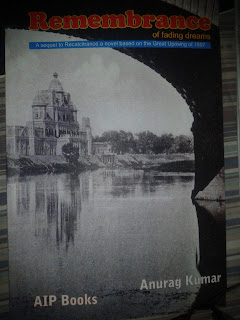 Anurag Kumar has brought out another book, Remembrance, a sequel to his previous Recalcitrance.  Here is a quick look at what I wrote about it.

I am quoting from the blurbs here: "Anurag is a freelance journalist.  He belongs to a very old family of Lucknow which witnessed the events of 1857.  Ever since childhood he was fascinated by the Great Uprising"
1857 was indeed a very tumultuous time and there were surely some great stories that can be written on that period.  My favorite is Ruskin Bond's "A flight of pigeons".
Recalcitrance follows the lives of two friends Chote Bhaiyya and Narinderlal who happen to witness the events that take place in Lucknow at close quarters.  Chote Bhaiyya finds himself smitten by a muslim girl, but cannot find the courage to act in time to get close to her.
The problem with the book - despite a story that should practically tell itself, after all the events were happening so rapidly at the time - is that it gives out a very disjointed feel.  It proceeds from one event to another without any apparent link. There is no attempt to bring together the events at any later chapter either. Several characters are not named  but referred to ambiguously like, "a holy man", a "general" etc.  I got the feeling that the author is trying to point to some important historical figures of the time, but I failed to place them.
This incoherence spoils the story and I wish the author had worked harder on it, because it is apparent that the subject is very close to his heart.


Remembrance continues with the story of Chhote Bhaiyya and Narinderlal.   The Great Uprising is over, and the persons involved with it have to return to their normal lives.  Chhote Bhaiyya returns to his father, and tries to settle himself in his family business.  His wish to do something to upset the British rule has not gone, and he is merely looking for the right opportunity.

The story here is very sound, as was the case with Recalcitrance.  There is some improvement as the narration is not as disjointed as was in the previous book.   The story needs some detailing and fleshing out though,  it is written more like a summary, a rapid fire listing of events.  The language needs some serious editing as well.

The market is inundated with books on romance and 'coming-of-age' stuff.  This theme is repetitive and boring.  In comparison, the subject of this book is refreshing.  I only wish the author had worked harder on this subject and made the books better. 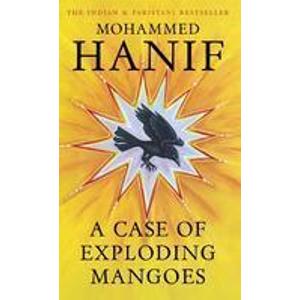 "Why keep reading it when you already know that the hero is going to die." asks Ali
"To see how he dies.  What were his last words. That kind of a thing" replies Obaid

We know right from the start about the people who are going to die, and the manner of their death. The death of Gen Zia, then President of Pakistan, and the US Ambassador along with a clutch of his Generals , is common knowledge. We know his plane had a mysterious crash that was subsequently put down to some technical fault in the aircraft.  This novel is a fictionalised account of the events leading to Zia's death.

An Air Force cadet, Ali Shigri is on the scene of Zia's death with some inside knowledge of the proceedings. He narrates his side of the story in the first person.  There is a further account of the goings on in Zia's cabinet in the third person. The devout Gen. Zia is in the habit of opening the Koran at a random page each day and taking the words inscribed therein as a kind of message from the Allah. He is disturbed when he finds himself opening the page describing Jonah again and again. He feels it is a bad omen of some kind and orders his security tightened.

Gradually, we find that Zia's suspicions are not far from the mark.  There are several people who are conspiring to kill him. Ali Shigri's father, General Shigri, committed suicide in mysterious circumstances years ago.  Ali suspects the hand of his fellow officers in the 'suicide'. The CIA is always loitering around, wanting to swing things in its favor by yet another kill. Zia's Generals have agendas of their own. The leader of the gutter cleaning association wants him dead. So does Zainab, the blind rape victim, who has been awarded a sentance for fornicating and is to be publically stoned to death. Will her curses be powerful enough to kill the President?

The novel keeps us in the confines of the upper strata of the rulers of Pakistan. We do not stray beyond that. Hanif creates a closed space where his characters exist.  Like a spotlight in a circus the light seems to fall in and around his characters and keeps all else in darkness.  So we live in a pool of light in the Army House where Zia has sequestered himself, with Zia at the center of it.  Or we move to the pool of light (and at times, darkness) where Ali Shigri is, in the jail or in the Air Force Campus.  At times the spotlight moves and falls on common people going about their lives, but that happens only now and then.  At no time do we lose sight of our main characters and what they are up to.

I particularly liked all the passages that deal with Gen. Zia.  He is seen as a devout, canny, foolish, foolhardy, cunning, perceptive, trusting and a suspicious person all at once.  In short, he is a bundle of contradictions.  All the passages dealing with him are so humourous, so darkly humourous that I wanted to read them again and again.  In fact, the novel is replete with black humour. You find yourself smiling and chuckling even as a character hurtles to his death.

Mohammad Hanif pulls no punches in describing the political scene in Pakistan.  There is no leeway given to politicians or the religious heads.  You can see that they are being blamed for the mess that Pakistan is. He writes as if he feels for his country, even as he exposes its warts. He writes as if he wants to heal, and not maim his country.  I felt quite envious, I must say.  I wish we had such a writer for India as well.

His book is mostly crisp, the language terse. As is usual with books, the middle sags at times, mostly because the motives of Ali Shigri are revealed to us with excrutiating slowness. Once we know what Ali is up to, the book regains its pace and clip clops smartly to the grand finale.

Hanif does like to end his books with a bang. And we are left to scramble back to look at the chain of
cause-and-effect that led to the final blast. This is similar to the situation in his second book, "Our Lady of Alice Bhatti" , which I happened to read first. 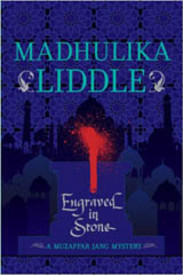 We were introduced to a dashing and handsome nawab in 'The Englishman's Cameo' by Madhullika Liddle.  According to a wikipedia entry,


The Englishman’s Cameo introduces Muzaffar Jang, a twenty-five-year-old Mughal nobleman living in the Delhi of 1656 AD. Muzaffar ends up investigating a murder of which his friend, a jeweller’s assistant, is accused. The book became a bestseller in India, and was published in French by Editions Philippe Picquier, as Le Camée Anglais.

Muzaffar Jang is young, intelligent, futuristic and well read.  His parents died when he was young.  He was brought up by his wise and kindly older sister, Zeenat and brother-in-law.  In the first book, Muzaffar takes upon himself the task of investigating a murder to help his friend.

Eighth Guest and other Muzaffar Jang mysteries is a collection of short stories featuring Muzaffar Jang as he goes about solving various mysteries.  Although the stories can be read independent of each other, there is a thread of continuity between them.

Engraved in Stone is the latest novel in the series.  Catching the eye of the high and mighty is not always an advantage, Muzaffar knows.  When the Diwan-e-kul hands the task of finding the murderer of Mumtaz Hassan, a prominent trader, to Muzaffar, he is not entirely thrilled.  One misstep and he could find himself on the gallows.  Muzaffar sets off immediately, chasing after an elusive murderer before his trail gets cold.

He is aided by his loyal friend and cousin Akram.  Not 'aided' really.  Merely 'accompanied' by.  Akram is a bit of a dandy and is happy being a pampered nawab with a good heart.  I am always happy to see Akram by Muzaffar's side, he is good fun.  I hope he is there in ALL of Muzaffar's books.

The USP of these books is the beautiful backdrop of historical Dilli.  I love the descriptions of the bazaar, the clothes, the men (and women) and their manners, the food, the jewellery.   I can feel the swish of their chogas and dupattas as they go about their business.  Madhulika's sound knowledge of history and faultless language is what enhances this effect.

This time round, Muzaffar has a love interest as well.  Beautiful Shireen was introduced to us in the last story of the previous book.  Zeenat is keen on Muzaffar settling down with Shireen.  Muzaffar is not sure about this, he has shadows in his heart, left by a previous love.

If you like historical fiction, you will love this book.  As I did. The only bit of annoyance for me was the harping on the perfection of Shireen.  I hope we will have no more of that in the future books.  Madhulika's writing is so evocative that it brings the world of Muzaffar to life.