I got a parcel of 4 books from my mother when I turned 15.  Among them were two books by Daphne Du Maurier, Rebecca and House on the Strand.  I got through with these two books and Daphne Du Maurier shot up to the top of my favorite writers list.  I have devoured several of her books therafter and loved each one of them.
"Last night I dreamt I went to Manderley again."  This is the famous opening line of the novel.  The story is narrated by a nameless heroine, who then launches into a description of a lovely house and its garden that has now run to rack and ruin.  From there she goes into a flashback where she describes how she met Maximillian De Winter in Monte Carlo.  At the time our heroine was a companion to Mrs. Van Hopper who was holidaying there.  Mrs. Van Hopper happens to be a snob who loves to befriend important people and forces herself upon Maxim.  However, Mrs. Van Hopper is laid up in bed, sick, and the heroine has to spend time alone.  She finds herself in the company of Maxim who seems to enjoy taking her around.  When it is time for Mrs. Van Hopper to go away, the girl goes to Maxim to say goodbye.  To her utter surprise, Maxim proposes marriage to her. 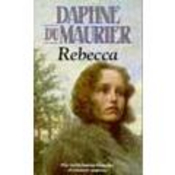 Suddenly, the girl is plucked from a subservient position to become the wife of the rich and handsome Maxim De Winter, the master of the famous house Manderley.  Even though she loves Maxim and adores Manderley, she feels like a fish out of water in the fancy surroundings and feels intimidated by the the rituals of a big house, the servants and the social duties thrust upon her.  It is not just the sudden upgrade in her social standing that is unsettling to her; she has to cope with the ghost of Maxim's first wife Rebecca who had died in a boat accident.

Rebecca was beautiful, tall, well dressed, had impeccable taste and manners, threw grand parties and everyone loved her. Our heroine finds herself being compared to her constantly by everyone.  She finds Maxim acting distant and assumes that he too, like the others, finds her very unattractive and cannot get Rebecca out of his mind.  Until some old secrets come tumbling out of the closet and she finds out how wrong she was about things.

The novel is narrated in the first person, from the point of view of the heroine who is hesitant, unsure of herself and a very young girl.  Her own inadequacies colour her view of what is going on.  Her strength lies in the purity of her love and the very things that she felt were her drawbacks, i.e. her unworldliness, her simplicity and her lack of vanity.  These things come to the fore when she is tested and she comes out of her troubles with flying colours.

The style of the novel is perfect, simple and taut.  The romance, mystery and thrills keep you flipping pages till you reach the very end.  There are several unforgettable characters, Maxim De Winter, remote, aristocratic and so desirable; Mrs. Danvers who is always around to see to it that our heroine never forgets how inferior she is;  Frank Crawley, Maxim's friend and Manager, who is the only true friend she has;  Beatrice and Giles - Maxim's sister and brother-in-law - bumbling but affectionate;  Favell, Rebecca's brother who is always at hand to stir up trouble;  The eponymous character, Rebecca, Maxim's first wife who casts her shadow on everything that goes on, even though she is long dead.

This book is supposed to be based on Jane Eyre, a favorite of Daphne Du Maurier's.  This book lives up to its inspiration in every way.  It is a classic, that's for sure.

There is no dearth of material about the life and times of Charles Dickens, one of the most popular novelists of all times, one of my top favorites for a long long time.  He was a master storyteller and so dearly beloved that when my MA Lit. lecturer announced in a class that he had many flaws as a novelist, the whole class let out several exclamation of dissent.  Dickens wrote many iconic novels and has enjoyed a readership that even J.K. Rowling can envy.

To honor this unparallelled master Google depicted this picture on its site:

I have commenced reading The Pickwick Papers today after many years.  Here is a paragraph out of this highly amusing book.

“On his right hand, sat Mr. Tracy Tupman; the too susceptible Tupman, who to the wisdom and experience of maturer years superadded the enthusiasm and ardor of a boy, in the most interesting and pardonable of human weaknesses – love.  Time and feeding had expanded that once romantic form; the black silk waistcoat had become more and more developed; inch by inch had the gold watch chain beneath it disappeared from within the range of Tupman's vision; and gradually had the capacious chin encroached upon the borders of the white cravat, but the soul of Tupman had known no change – admiration of the fair sex was still its ruling passion.”

In a few skillful lines, he sketches the form and character of Mr. Tracy Tupman.  This was his most endearing quality.  It made his novels feel like a visual feast, it made imagining the characters easy, it made them vivid and it made them live in our memory forever.  Happy Birthday Charles Dickens, I am sure your novels will live forever.
Posted by Ava at 6:57 am 13 comments: