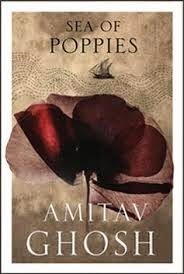 Deeti has this vision of a ship, and a premonition that it will play a role in her life in times to come. How can a simple native woman, bound to her lands and her husband forever suddenly find herself on a ship is something she cannot envision. All she does is to tend to her small farm while her husband works in the opium factory.

Zachary has signed on as a cabin boy but finds himself rising through the ranks rapidly till he is the 2nd mate to the captain. He just wants to do his job honestly and make it in life. He is just a man of mixed colour from Baltimore, but finds himself stamped as a white gentleman.

Paulette is the daughter of a deceased Botanist living on charity. Her benefactors dont know that she is more native than the natives and has a brother too.

Pandit Nob Kissin Pandey is an accountant with a mission. He wants to recreate the world of Krishna and has already sighted a person who is the latest avatar of the Lord.

Raja Neel is lord of all he surveys, but he know how precarious his financial position is. What he does not know is the devious means that can easily be used against him to reduce him to the lowest form of human existence.

Mr. Burnham himself indirectly controlling the destiny of all these people though he is just a merchant who wants to makes profit.

How all these people, including Kalua, Heeru, Munia, Serang Ali, Jodu and many others find themselves abroad the Ibis is what constitues the story.

It is the first in the series of a promised trilogy by Amitav Ghosh. In this novel, he traces the background of his characters and gives us a hint of what to expect in future.

Amitav paints an unhurried picture of his characters, to make us understand them all the better. We are sent back to the times when British were the masters of the world, thanks to their understanding of the seas. However, it is their cunning nature and adaptability that makes them win the game, again and again. They knew how to set up ruses and use their trump cards. They knew how to make a person feel like a king and then .. suddenly throw him down into the deep abyss of sub-human existence.

They knew how to manipulate the seas and the people.

What do I say about the style of Amitav Ghosh. That is smooth and fine as sweet wine? That there is never an extra word, nor a word less? That he uses the language with the finesse of a master? That he is a devious devilish craftsman who can make us see what he sees?

The book - unputdownable. The next in the series - eagerly awaited.
Posted by Ava at 9:42 pm 12 comments:

Labels: Amitav Ghosh, The Ibis Trilogy, The Sea of Poppies

Karen Joy Fowler's book, The Jane Austen Book Club, came highly recommended by some online reviews. The name and theme of the book was highly tantalising to me, being a huge fan of Jane Austen. I ran around trying to procure the book anyhow. I put in a request at my usual bookshop and soon got a call by them that the book was in stock. Off I went like a rabbit to get the book I had long been dying to read.

No doubt the book is a gem. It is subtly crafted and the Jane Austen references are so subtle and gentle that they may not be there at all. Of all the Jane Austen books, it is the closest to Emma. Which is very nice, as Emma is my favorite as well. I even love its derivative, the movie Clueless.

The book follows the lives of six people who form a book club. Their purpose is to read and discuss the works of Jane Austen. For six months, they meet at the home of each member to read/discuss a book. Their lives superimpose the book club and they go through some changes as they keep meeting.

However, I found the book not all that it was hyped to be. I am quite used to 'slow' fiction, I read Anne Tyler happily and usually love her books. They have a charm which is hard to resist.

For some reason, I found the KJF book a little shallow. Sure, her characters are at some kind of crossroads, but they never really unfurl themselves. They don't walk out of the pages and grip us like the characters of Anne Tyler. Her story goes backward and forward in time, trying to give us an overview of her characters, but despite the intense focus on a character at a time, they never come together for us. Of all her characters, I liked Bernadette the best, but she wasnt allowed any 'action' in the story. The love story proceeds too slowly, in fact the love angle took me by surprise.

Umm... on second thoughts, as the book was on the bestseller list for a while, may be it was the hype that pushed my expectations too high, or maybe I did not read it in the right frame of mind, but this is my first impression and verdict on this book.
Posted by Ava at 2:44 am 14 comments:

Here is a reason why I like Hari Kunzru so much. Click on the title
Posted by Ava at 3:54 am 2 comments:

I knew of Sidney Sheldon as a writer of racy books, mostly bestsellers. It was only later, while watching an episode of 'I dream of Jeannie' that I found Sidney Sheldon was a scriptwriter too. I loved IDOJ and began thinking better of SS. Then I happened to see Rage of Angels on TV as a mini-series. It was well made, with Jaclyn Smith, much younger and slimmer Ken Howard, a very twisted looking Armand Assante. A good cast that performed well too. Ever since, it was 'sorta' on my wishlist.

When I finally laid my hands on it via indiaplaza.in, I read it almost (ahhh .. like in the olden days) at a stretch.

It isn't literature, but it is well written. No wonder about that, as Sidney probably got a lot of practice writing scripts. It is very well presented and researched. (Or rather the law-references look authentic enough) The plot is ambitious. The characters are definitely interesting. All in all, a very satisfying book.

The plot goes like this - Jennifer Parker arrives in New York, a bright law graduate and is recruited for research by a hot-shot lawyer in middle of his big case. She is used by the defendant, a mafioso - Micheal Moretti to threaten a witness. The hot-shot lawyer loses his case and tries to wreck revenge on the unwitting messenger - Jennifer. He wants her de-barred. But fortunately for Jennifer, the case is handed over to Adam Warner who saves her. A lonely, destitute Jennifer falls hard for Adam. Adam is likewise taken by the beautiful and spunky Jennifer. But he is married.  They have a torrid affair. On the other hand, Micheal Moretti also falls for Jennifer and pursues her relentlessly, until, on a rebound, she gives in to him, and causes a lot of problems for herself.

The book was written in 1980 when evil and good were very black and white. It is easy to see that Adam Warner is absolutely Mr. Right, and were he not married, life would have been a breeze for Jennifer. They would have married, she would have been  an able spouse and they would have been a perfect President and First Lady. But alas, Adam married his childhood sweetheart when she lost her father. On top of that, Mary Beth wants all the goodies associated with being a First Lady and would not release her husband. Adam Warner is too much of a gentleman to 'insist' upon divorce, bearing Mary Beth like a cross. In the current scenario, he would be a wimp goody two shoes who could not stand up for the woman he loved, rather than the godly figure he cuts in this novel.

Micheal Moretti is the personification of the devil. In fact Sidney compares him to Satan a couple of times. He is totally unapologetic about his business, sneering at the corporate types and says they are 'saintly' because they aren't caught. He mentions to Jennifer that she uses devious means to win her cases for bad people at times, so what is wrong with fighting his cases. Jennifer is quite taken in by his reasoning and is smitten by his passionate love-making.

Too bad the novelist chose the beaten path of punishing the ungodly at the end of the novel. If it had been written in current times when the morality is more ambivalent, it could have been an interesting blurring of common perceptions of what is good and what is bad.

"I try to write my books so the reader can't put them down," Sidney Sheldon explained in a 1982 interview. "I try to construct them so when the reader gets to the end of a chapter, he or she has to read just one more chapter. It's the technique of the old Saturday afternoon serial: leave the guy hanging on the edge of the cliff at the end of the chapter."

Yes, the old man knew how to write and made pots of money too - writing similar unputdownables.
Posted by Ava at 2:48 am 5 comments: