I am not a big fan of scary books, I scare easily and I have no intention of keeping awake at nights imagining movements around the house. Yet, I am a fan of Shirley Jackson.  I love beautiful prose. For that reason alone, I picked up this book by Jackson.  It is supposed to be the best supernatural literary story of all times.  Stephan King has admitted to being heavily influenced by her.

Eleanor Vance receives a letter from Dr. Montague, asking her to be a guest at Hill House.  A small party is planning to spend a summer there and Dr. Montague hopes to study the presence of supernatural elements that the house is supposed to have.  She accepts the invitation.  She has been living with her sister and brother-in-law after the death of her mother.  She looks forward to this invitation as an escape from her dull life.

She reaches Hill House and meets the other guests.  There is Theodora, who is very friendly and full of fun.  Luke Sanderson is the future heir of the house, hence he sees himself as the host. Dr. Montague is the head of the party and gives them various directions and pointers.

He tells the other about the background of the unhappy house which has seen some deaths and a suicide.  No one seems to be willing to stay more than a few days here; those who have rented the house, abandoned it hastily.

Soon, Eleanor and others begin experiences supernatural happenings. Will they discover who is behind them, or will they succumb to fear like the previous inhabitants.

Daphne du Maurier would have been very proud of way Shirley Jackson describes the house.  It is the centerpiece of the story.  It seems to have a sinister life of its own.  Despite its ugliness, it casts a spell on Eleanor.

The story is beautifully written, earning it the sobriquet of a 'literary' ghost story. We never really know all about the four main characters, a lot is just pointed at, we have to fill in the remaining information in our imagination.

Even though I am scared of ghost stories, I was charmed by this one, if that is the correct phrase to use. Shirley Jackson knows how to evoke terror through the written word.

This novel has been made into two movies, both called 'The Haunting', one in 1963 (which has been acclaimed) and the other in 1999 (which has not been received well).
Posted by Ava at 7:59 am 1 comment: 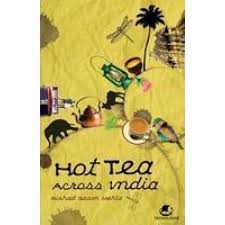 This is not the first time I have fallen for an attractive cover and an enticing name,  Tea is to Indians what magic potion is to Asterix.  I know some people who can imbibe as many as fourteen cups a day.

This book is not just about tea, though it pops up quite frequently in it.  It is a travelogue. I will amend that.  It is an adventure-travelogue. Rishad Saam Mehta traveled at any given opportunity, whether hitching a ride on a truck, or on a train, rickety bus, airplane, motorcycle or myriad cars.

This book is a collection of his essays on a travel to some part of the country, titled by the most remarkable point of his journey.  He has been nearly robbed, looked down the gun of a policeman manning checkpoints, caught pooping in a wrong place, subjected to arson and had his bones rattled in a rickety bus.

No matter where Rishad is, or what he is doing, his narration is so interesting, so full of warmth that we are loath to put the book down.  He is always aware of the beauty of the place he is visiting, the history behind it and remarks on it.

"Chandra Tal is as close to heaven as you can get while yet in a mortal form."

Don't expect pretty purple prose though.  This is only on occasions when he is struck by the beauty of his surrounding. That is when he gets all lyrical.

While traveling to Manali he was tempted to take this 'LUXAREY BUS'.  Imagining plush seats and a comfortable ride, he is rudely awakened by a wreck on four wheels and wooden seats. He says:


Most of the other passengers were simple hill folk for whom the bus really was a luxury- because for them anything that moved on its own accord without the help of a four legged creature was a luxury.

Then there were people he met:


The first thing that struck me about him was his hair: hormones had made a serious navigational error because while his pate was shining and bald, his shoulders were a barber's playground.

He is very witty without sounding smart-alecy.  How he manages that, I don't know.  He has, I presume, an innate and an enviable talent for writing.  His anecdotes are so well told, that most times I was laughing out loud.

I polished off his book in a couple of long sittings.  I was blessed with very little work in the office and read this book on phone all day.

He touches upon his visits to Leh, Ladakh, Drass, Srinagar, Delhi-Chandigarh highway, Kerala, Jaisalmer, Rann of Kutch.  He has done river rafting and also participated in Raid-de-Himalaya. He knows how to let us know the difficulties of his situation without depressing us.

I got a recommendation for this book by @raghavmodi of tickereatstheworld@wordpress.com.

Like in my last blog post, I will go into a didactic mode and exhort all to read this book.

Book Shots is an initiative by James Patterson, the acclaimed author of thrillers, to present a series of novellas under 150 pages and under 5$ as a sort of a quick read.  The idea is to use the presenter 'James Patterson' as a brand name to sell many books; so I presume.

I am not much of a thriller reader but the name was seductive and I fell for the quickie, cheapie book.  I was expecting it to be a thriller of some sort, thanks to reputation of its Godfather.  I was wrong.

Jane Avery is a divorcee who has tried to drown her heartbreak over her cheating ex-husband by watching Netflix and shunning all social life.  Her sister and her friends are trying to nudge her back out there, but Jane isn't interested.

UNTIL she gets a sexy little black dress and turns into this whole different person.  Suddenly she is into casual sex and straight-arms any attempts at second dates or any other form of male contact other than sex.  I can understand her motivation, she has just suffered a terrible break-up and does not trust herself in any other relationship.

ALAS, the story does not go there.  Her psychological motivations are all bypassed, despite the presence of a Psychoanalyst that Jane visits every week. There are absolutely no thriller elements in the book either.  Apart from one little hiccup, nothing noteworthy really happens to her.  We are treated to rather boring descriptions of sex.  With gorgeous men. That's it.

To be fair, the writing is good, which means the language does not make you cringe.

Usually I do not try to 'recommend' or 'warn off' people from a book.  Here, I am tempted to issue a warning.  Do not bother reading this.

The Hogarth Press got in touch with eight acclaimed writers to put a modern spin on Shakespeare Plays of their choosing.  I chose to read Anne Tyler's Vinegar Girls, published under project Hogarth Shakespeare, as I love Anne Tyler immensely.

Anne Tyler brings The Taming of the Shrew to life in Baltimore. Except Kate Batista cannot really be called a shrew now.  She is merely a blunt person who lacks social skills.  She has been caring for her father and younger sister, Bunny for years now.  Her social life is, of course, non-existent.  She has a sort of a crush on a fellow teacher, but does nothing about it.  She seems content to spend the rest of her life gardening, working at a day-care and being the housekeeper.

Her father, Louis Batista is a brilliant scientist.  At home is just a lost father who likes to lean a bit too much on his elder daughter, and be a bit too indulgent with his younger one.   His assistant at work is about to be deported and he wants Kate to marry him.  This is such a preposterous idea that Kate is outraged.  Pyotr, the man in question, is an orphan from Russia.  He seems to take a fancy to Kate, he actually enjoys her bluntness and likes her long hair.  Kate turns into a prickly cactus on seeing him.

Here we get to see the comic touch of Anne Tyler.  The exchanges between Kate, her father, Pyotr and Bunny are hilarious.  Tyler has a deft touch with her characters, and she seems to have some special skills with displaced people.  Her portrayal of the Iranian American Maryam in 'Digging to America' was simply brilliant. Here also, she is deeply sympathetic (without seeming so) with Pyotr, with his peculiar accent and choice of words.

Vinegar Girl is primarily about Kate Batista and her jaundiced view of life in general.  It is also about a displaced person (Pyotr) who is trying claim some space in this world for himself. He has left his country where he had no one and is trying to adapt to a new country where no one seems to be willing to accommodate him.

This is a link to other projects of Hogarth Shakespeare that are published or due out soon.

This book is the fifth in the Galveston 1900 Indignities series.  The journey started with Catherine Eastman landing in Galveston in 1898 as a young fifteen year old girl with her mother.  They came to the USA from England in hopes of having a better life.

Catherine has had a very hard life.  She was married by 16 to a very nice man, but was abducted by a sadistic serial killer David Brooks which led to the dissolution of her marriage.  Later she married a kind man who had an accident which again led to the dissolution of her marriage.  Thus, at a very young age she had three children from different men  She also adopted a girl that was her daughter's half sister.

She studied hard, despite all the setbacks in her life, and became a doctor.  When the last book closed, she was married happily to Trent Mathews and living in Rosenberg, Texas.  She plans to return to Galveston eventually.

Right now, she is very happy.  She is expecting a child with Trent.  What she does not know is that she is harboring a criminal in her house who will turn her world upside down.  She has to stay strong for the sake of her children, but how long will life continue to deal her with a raw hand?

Just like the other books in the Galveston series, this too is a smooth read.  It is a page turner, no doubt about that.  The story is told in simple words and without too many emotional hiccups.

The book is set in 1906. It was fun to read about the time when telephones were connected by operators.  These ladies were a reliable channel of gossip and also very often, important information.  People still traveled by horseback and buggies.  Automobiles were just beginning to make an appearance.  For most people, trains were the best way to travel.

In the first book, The Arrival, we got a look at how primitive the policing system was.  In this book we see how an improved technology was making an improvement in the policing work.

The entire series are perfect for a light read.
Posted by Ava at 8:16 pm No comments: