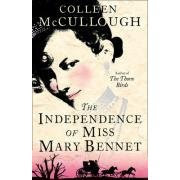 This is not the first time we have encountered an Austen derivative.  I loved  the movie Clueless which is a modern re-telling of Emma.  Gurinder Chadha's movie Bride and Prejudice was colourful and interesting, if not a favorite.  A couple of book sites on my bloglist regularly come up with reviews of books on some aspect of life of Mr. Darcy or some other Austen character.  At one time I looked high and low for a book called 'The Jane Austen Book Club', to be sorely disappointed by it.

This book came highly recommended by a book site I subscribe to, and it is written by Colleen McCullough, the author of Thorn Birds which is supposed to be the Australian Gone with the Wind. I have read the Thorn Birds and loved it, not as much as GWTW, but well enough.

The book begins with the death of Mrs. Bennet.  Mr. Bennet died a couple of years after Pride and Prejudice ended. Elizabeth and Jane are safely ensconced in their homes as Mrs Darcy and Mrs Bingley.  Kitty is a rich and merry widow thanks to an advantageous marriage.  Lydia is in shambles, Wickham is at war and she is an alcoholic and sex crazed.  Mary has spent the past 17 years (since the big wedding between Darcy and Lizzie) caring for her mother and keeping her away from causing any further embarrassment to her daughters. Mary is no longer the ugly duckling, but rivals Elizabeth in handsomeness.  She has spent her exile reading books and developing a mind, and now, with her mother gone, she is looking forward to doing something with her life.  All this information is stuffed into the first chapter, just like Jane used to do.

The first time I picked up the novel, I dropped it in disgust because Mr Darcy was addressed as Fitz.  I am not sure if even Elizabeth would have deemed it proper to address her husband as anything but Mr. Darcy, let alone his sister-in-law.  If I remember correctly, even Elizabeth's father referred to his sons-in-law by their surname, Wickham, Bingley, Darcy.

Anyhow, the novel gathered dust for nearly a year. A week back I picked it up again and this time, expecting the worst, read it through.  Jane is still her sweet (cloying?) self and popping babies.  Elizabeth and Darcy (no Fitz for me) have troubles.  He is back to being the stiff and starchy one, she is disappointed in him because among other things, ahem .. he is a beast in bed.  Wooo, I say, bring him on.  On top of this, their firstborn, a son, is allegedly effeminate.  Kitty and Lydia are marginalized in this novel too.  Mary gets the center stage here, sort of.  (Even now, Elizabeth and Darcy cannot be shoved into a corner.  At times it seems as if the novel is more about them). Mary is on a mission to write a book about the British poor. Cough. She has some hair raising adventures, the rest of the family also gets pulled into it.

The story is interesting enough on its own but there is nothing Austenian about it except the characters, that's for sure.  People use four letter words and foul language as if they lived in nastier times.  There is even ess ee ex .. phew !   It messes with the kind of an image you have of the characters and the times.  What I like best about Austen's books is its faithful rendition of life in her times.  The leisurely walks, the formal way of addressing each other, the dresses, the balls, the MEN.  The way the ladies and the gentlemen spent their times.  Even though the books are really romances, they are also a mirror of their times.  I hate this book for shattering that beautiful image.

Even Jane's worst critics admit that she had a faultless style.  I am amazed to say this of the author of Thorn Birds, but I found that lacking woefully.  There were many repetitions of phrases and words, which rankled.  Did Ms. McCullough have a bad editor this time round?  No, as an Austen sequel the novel failed badly.  Not surprising really, which sequel has worked?  The sequel to Gone With The Wind, Scarlett by Alexandra Ripley  was awful. Mrs De Winter by Susan Hall was a terrible sequel to Rebecca. While one can understand the itch writers get to try to imagine 'what happened afterwards', one wishes they desist, if this is all they have to offer.

Spoiler Spoiler dirty Spoiler :  In case you don't want to read this novel and are wondering what really happens to Mary, she does not write that book, but settles down with a rich Scottish newspaper owner in the vicinity of Pemberley. Spoiler Ends.


Super Spoiler: She has sex with him before marriage - GASP! Super Spoiler ends.
Posted by Ava at 8:22 pm 8 comments: 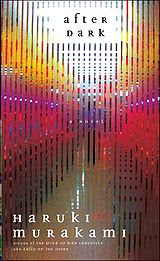 After I read Kafka on the Shore by Haruki Murakami, I picked up Norwegian Wood by the same author. Norwegian Wood was a sad love story about a young frail girl Naoko, whose high school boyfriend commits suicide. She falls into deep depression after that and has problem fitting in with life. Her boyfriend's best friend, Toru, befriends her and falls in love with her. However, her depressed state prevents her from forming any relationship and she leaves for a mental asylum. Toru meets Midori and they are drawn to each other. But with the shadow of Naoko hanging over him, Toru is unable to move on. It is a good book but I was fresh from the magic realism of Kafka on the shore and the book was kind of depressing.


Last Saturday, I picked up After Dark by Murakami from the library along with other books. I saved After Dark for the last, wanting to savour it.  A couple of days ago, the other stock exhausted, I opened this book.


Eyes mark the shape of the city.

The first line read. And I knew I was hooked. It is a slim book, mere 200 pages of the small size.

says David Mitchell of Guardian, on the blurb. Ditto, say I.

The novel is about what happens to people after dark. In the few hours from midnight to 5 AM when the world sleeps peacefully, there are some who choose to stay awake. Why do they do that? What is behind their wish to spend the night waking?

Mari chooses to spend the night waking as she seems to have missed the last train home. She sits in Denny's with a cup of coffee and is hunched over her book, reading with deep concentration. She is disturbed by Takahashi, a trombone player who knows her and more particularly, her beautiful sister Eri. Takashahi is here because he plays with his band in a nearby basement and is at Denny's for a midnight snack. Later he sends over the manager of a Love Hotel called Alphaville. A Chinese girl has been hurt and they need someone who knows Chinese to talk to her. All this time, Mari's beautiful sister Eri sleeps a sleep that is too perfect to be true.

At the root of everything is the troubled relationship between the beautiful Eri and the homely Mari who chooses to drown herself in studies. Takashahi has a troubled past too. He is an orphan who has been brought up by his criminal father and a stepmother. He is at a crossroad, having to choose between a career in Law and Music. He is very fond of Five Spot After Dark which made him learn how to play a trombone.

It is a night full of happenings and conversations and introspection which will transform the lives of Mari and Takashahi, and Eri's too, perhaps.

Murkami's magic is all over the book. You hear the music the characters talk about, you feel what they feel. He has this ability of making you see right into the soul of people.
Posted by Ava at 1:06 am 5 comments: