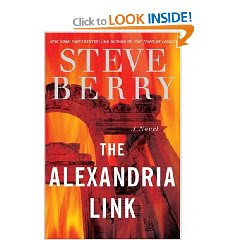 Among the books to fall into my lap recently (link) was The Alexandria Link by Steve Berry.

The novel starts with a bit of an epilogue the purpose of which becomes clear later. The second chapter is when the action starts. Cotton Malone, ex- US agent finds his ex-wife on his doorstep in Denmark to inform him that their son had been kidnapped. Within minutes he finds his house and shop burned to ashes, and is on the run from assassins as he tries to unravel the mystery of his son’s kidnapping.

Several other links open up. Stephanie, Cotton Malone’s ex-boss finds herself embroiled in conspiracies of various sorts. Across the globe in Vienna, another thread in the story is revealed when a mysterious organization called The Order of the Golden Fleece that seems interested in causing economic and political instability by using religious controversies, is found to be embroiled in the kidnapping of Gary Malone.

Soon the kidnapping angle is discarded when it is revealed that the actual quest is the lost library of Alexandria and Cotton Malone is being coerced into tracing it. As the novel progresses, the shit rises higher, and all the good characters seem on the verge of elimination. Sigh !

It’s been quite a while since I read a racy bestseller. As they go, The Alexandria Link is gripping and well written, and keeps you turning pages. Each chapter has this soap opera kind of ‘gasp’ endings which is supposed to egg you on to read the next page without break. It works most times, at times it bugs you. There is plenty of categorical listing of good and bad guys – US, Israel are good guys, Arabs – BAD! Europeans – not too good. All these simplistic allusions get to you at times. Anyhow they are too superficial to really affect you. A lot of heavy tracts of ancient manuscripts are thrown in to make you feel you dealing with serious history. There is a Dan Brown like chase for clues and links that ONLY Cotton Malone is able to decode.

Now that reminds me of the horribly cheesy ending of Superman II, the Christopher Reeve one (Mind you, I liked the movie). The trio of Zod, Ursa and Non are vanquished, the world is set right. The President of the US is restored to the ‘throne’ of the free world. Supe comes flying in, resplendent in his eye blinding blue suit with the red undie and brings back the top of the White House with the flag with was blown away by bad man. Dhan Tan Na! Superman is here and all is well with the world.

As an aside, I really like the Indian politicians who are so obviously bad, they are human! In books like these, the President of USA is depicted as some kind of an un-impeachable hero. Almost like royalty.

Though this book is better written than the Dan Brown ones, I must say I liked Da Vinci Code better than this. At least he kept the Prez out of it and turned it into a genuine thriller.

The top dog in this genre is undoubtedly Umberto Eco with his The Name of the Rose; these two gentlemen don’t even come close.
Posted by Ava at 8:23 am 21 comments:

Anne Bronte - Agnes Grey and The Tenant of Wildfell Hall 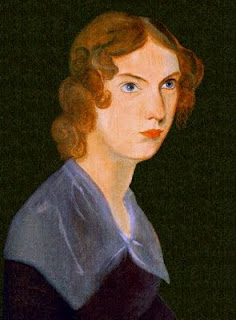 The more said about the Bronte sisters is less. Emily Bronte’s Wuthering Heights is a classic, Charlotte Bronte’s Jane Eyre is likewise, a classic. However the two books by Anne Bronte are often overlooked. She outlived her most illustrious sister, Emily, by a year, dying at the young age of twenty-nine. In her lifetime she wrote only two books, Agnes Grey and The Tenant of Wildfell Hall. Even with my avid readings I have not read the other books by Charlotte – Vilette, Professor and Shirley – mainly because I was ignorant about them. These books and Anne’s books were not readily available at my school library, where I read most of my classics. Recently, a friend of mine (Vani) visited my house and was struck by the amount of books I had. She had been gifted a number of books that were lying unread by her and offered to lend them to me. Never the one to look a book-gift horse in the mouth, I agreed. She offloaded a stack of books on to me and I was charmed to find amongst them The Tenant of Wildfell Hall. 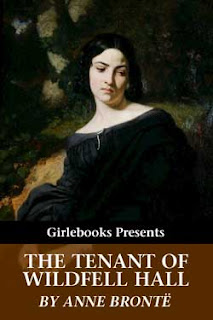 I began reading the book and was struck immediately by the way the book avoided the ‘Gothic’ and the ‘Romantic’ traps that were so typical of Victorian novelists. I was refreshed by her normal, colloquial use of language, the simple unassuming style. In fact I read the title page once more to check if the novel had been abridged, and hence simplified, but it was not. Let me outline the plot a little. I had assumed that the Tenant of Wildfell Hall was some Rochester/Heathcliff like creature, prowling amongst great halls full of angst. But this tenant is a mysterious lady called Mrs Helen Graham who is dressed in widow’s weeds and has a little son. She makes her living by selling paintings and seems to be a gentle lady who has fallen on ill days. The parish is abuzz with the new arrival and families start visiting the lady, eager to make acquaintance of her. She seems friendly but a bit standoffish. Her great beauty wins her admirers among the men, which in turn angers their former beaus. Some women are struck with jealousy and spread rumors about her character. It is then revealed that Helen is in fact on the run from an abusive husband, Huntingdon, and is trying to bring up her son away from his harmful influence. What happens to Helen, and how her past is revealed is the rest of the story.

The story was set in Regency and was based on the various young squires (some say the wicked Bronte brother, Branwell was the model) who led degenerate lives, going on wild drinking binges and hunting. Along with this, hitting on each others wives was also a great sport for them. The gentler wives were obviously distressed by the events. To add to their misery, the law was stringent for women. They had no identity or existence without their husbands, could not own money or property independent of them. They could not leave their husbands without their consent, nor claim custody of their children. In such a background the mystery with which Helen Huntingdon has to surround herself is necessary, and the step she had taken was seen as unusually bold for those times. Anne invests strong characteristics in Helen and creates a character of great strength and beauty. Her characters spring out of the book, quite like the one’s created by Charles Dickens. She describes the landscapes beautifully. Her greatest strength however, is her graphic presentation of the society. She is able to bring to life the equally the degenerate lifestyle of Huntingdon and his friends and the family lives of the gentleman farmers that dwell around Wildfell Hall. Her humor is gentle and satirical like her famous predecessor Jane Austen. She is like a bolder and a more decisive version of Jane Austen. While her sisters content themselves with presenting just the lives of Heathcliff, Linton and Earnshaw on one hand and just Rochester and Rivers on the other, Anne meticulously draws the portrait of several families near Wildfell Hall. We learn of the mating rituals of the young and fashionable when Helen is young and is being courted by several gentlemen. Likewise, we learn about the married lives of several people when Helen marries Huntingdon and starts living with him. She gives us valuable snapshots of various lives.

All people who habitually read Victorian or pre Victorian authors like Charles Dickens, Jane Austen, Charlotte and Emily Bronte among them, should read Anne Bronte too and not treat her like a ‘lesser’ Bronte (a fault I was prone to).

At home I was reading Tenant of Wildfell Hall and at work I downloaded her only other book, Agnes Grey. Agnes Grey lists in useful and entertaining detail the travails of a young girl who works as a governess for two families. The book is supposed to be drawn on her own experiences in a couple of households as a governess. Agnes is a young gentlewoman fallen on hard times. But her betters in wealth treat her no better than a servant and often heap abuse on her, neglect her and inflict her with spoilt children. However, she meets a cute curate and the story ends happily. This book is very slim and not ridden with any lengthy digressions that often mar the classics of that age. She goes deep into the psychology of the character and describes their feelings in great detail. She also describes the environs almost photographically and brings the scene alive to us. 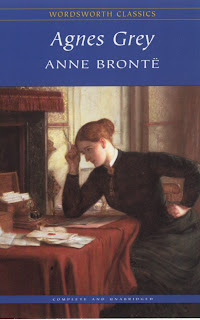 The only fault of this work is extreme piety and often correct-to-the-point-of-harshness attitude of the heroine. She allows no levity to the children and young girls, and often follows the story through to make the reader realize that the girls suffered in later due to some frivolity of theirs in young age.

If I compare both the books, Tenant of Wildfell Hall, her second work, is much better. The story is gripping and the female characters are very strong. In face of Huntingdon’s dissipation, Helen seems too correct, but that is the fault of the times. The character of Helen grows from a skittish young girl to a fine woman who is very sure of herself. When she finds love again, she is not afraid of revealing her true feelings and ends up practically proposing to the young man. Again, like Agnes Grey, Tenant of the Wildfell Hall is a slim book and does not put in any story elements that are unnecessary. Her realistic, flourish-less language is a delight to read even in these times. Indeed she writes more like Anne Austen than Anne Bronte. But she has to be lauded for sticking to her convictions and writing the way she did, so apart from the more romantic style of her sisters. With a will like hers and a talent like hers, who knows what beautiful stories she would have turned out, had she lived longer.
Posted by Ava at 7:36 pm 13 comments:

About Planet eBook and Our Free Classic Literature eBook

About Planet eBook and Our Free Classic Literature eBook