After I read the book through, I put it down and cried. Like Jayanta, the king’s younger son, I cried for “the imperfection of humans and for our stubborn refusal to make room for all those in between.” We are limited in our perceptions by our limited imagination, and having learnt about the world from persons of limited wisdom, our intellect is not allowed to form to its fullest. We no longer have teachers and thinkers of high caliber amongst us to challenge our minds. Our education is filled with pre-set syllabus and pre-set ways of understanding it. No wonder, as each generation develops, we find ourselves less tolerant of people who are not like us and pick fights over petty issues of region, religion and class. We follow customs and conventions of the society without trying to understand them, discarding them or adopting them for our convenience.

The Pregnant King by Devdutt Pattanaik is a tale told of a man, a king of a prosperous kingdom who finds himself bearing a child. Due to this ‘aberration of nature’ he finds his mind in a turmoil. His feelings for his child are more maternal than paternal and he finds himself grappling with issues of Dharma and of existence itself. Although this mythical tale of Yuvanashva is set in time more ancient than Mahabharata, the author takes the liberty of setting it parallel to parable of Pandavas.

Through the tale, we learn the ambiguous roles that many kings had to play. There were both feminine and masculine sides to them, their subjects learnt to revere them for their ability to portray the best of both sexes as an additional blessing instead of a curse for their multi-sexuality. We learn many of the old traditions that were coined for the good of people, the vedic way of life that ensured harmony and prosperity. The caste system which is much reviled now, was a means of allowing people in different walks of life to live with dignity.

However the fissures in this perfect way of life were already evident. When Ashwathama discarded his varna to become king, when Kshatriyas used deceit to win the war, when Dharma was abandoned in an attempt to cling to power. Then, as now, the final message is that it is Love that is most important, in its most sublime form, Compassion.

Here is a gem from the book – “Careful of the word unnatural. It reeks of arrogance. You are assuming you know the boundaries of nature. You don’t. There is more to life than your eyes can see. More than you can ever imagine. Nature comes from the mind of God. It is infinite. The finite human mind can never fathom it in totality.”

The tale is carefully woven. As in Mahabharata when the seeds of discord were sown generations before the actual war, here too we go back to the story of Yuvanashva’s mother, the widowed regent Shilavati and go on to learn life in Vallabhi the kingdom into which she is married. Yuvanashva is a sheltered child and needs to fulfill his primary function, father a son and provide and heir to the throne of Vallabhi before he can become king. It becomes hard to fathom whether Shilavati is hanging on to power for its own sake or as a maternal instinct to protect her son and allow him time to procreate. Kaliyuga is about to dawn and it is indicated when people use dharma to further their own end.

The wisest of Rishi’s Angirasa laugh when the Chief Priest Mandavya wonders why power corrupted the mind of Shilavati, she was a woman after all. “He thinks women are not corrupted by power” they laugh. The Angirasa also descend on the Pregnant King and seek to pray to him as they think he is a special signal from Gods. They open his mind to the ambivalence of human forms. Not all are rigidly male or female.

Myths are philosophic tales to educate us through entertainment and exist to inform us that nature is more powerful than any of us. Those readers who loved reading stories from Chandamama, tales of Mahabharata and Ramayana, Vikram and Betal stories will love this book. I was able to devour the 149 page book in 5-6 hours of continous reading, I found it gripping and unputdownable. The finale was satisfying and disturbing at the same time.

Devdutt Pattanaik has made a career out of studying the ancient myths and decoding them. He has his own website here.
Posted by Ava at 6:44 pm 22 comments:

Haruki Murakami - Kafka on the Shore

I can be highly suggestive when it comes to picking literature. I am more likely to pick up a book that has been written about well, and spoken of as a classic. It was this instinct I followed when picking up Kafka on the Shore by Haruki Murakami. Why this one by this writer? Because Kafka is my favorite author and I liked the use of his name. 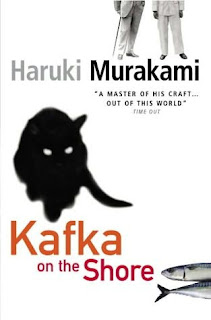 Some books are not written asking for appreciation. They exist and wait for you to pick them up to read. If you do so, YOU are rewarded, if you don't its YOUR loss. This is that kind of a book. It does not hang around waiting for you to award it 4 or 5 stars, it is 10 stars already, and if you recognize that fact, its your good luck.

Now, what kind of a genre does the book fall into? Is it a romance? Drama? Fantasy Fiction? A coming-of-age tale? A combo of the last two? It does defy compartmentalizing. What do genres exist for anyway? So that the bookstores and librarians know where to slot it?

I am asking a lot many questions, mainly because I am trying to find words and phrases to describe the book best, knowing I am going to fall short. Ok here goes.

Kafka on the shore is about a 15 year old boy who is trying to escape a horrific prophesy. To avoid it, he has to run away from home. On his travels he learns about life and that even if he cannot avoid fate, he learns to deal with it. He is also trying to find the answer to a question that dogs most children who have to do without a parent - Were they loved?

"Every time we wish for something with our whole heart, the universe conspires to fulfill it." We have heard this phrase a lot recently. Here in this book we get to see how exactly the universe conspires. We get a bit of 'behind-the-scene' activity that can qualify this books as fantasy fiction. But as the setting is our world, the 'other world' element is so well integrated, that it seems like an everyday happening. The 'niceness' of everyday happenings soften the blow of the bad things that are actually happening elsewhere. 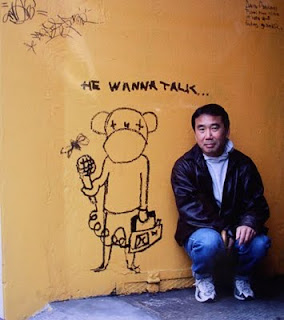 Murakami is an intellectual with varied tastes, you can see as you read his book. And he wears his it on his sleeve proudly, quite like TS Eliot. His literature shows up his taste for western music, philosophy and literature quite unabashedly. He references a lot of a music and books and speaks about them through some knowledgeable character. I quite like the 'international' feel of the book. Though it is set in Japan, it is so contemperory, it could have been in any corner of the world. There are no overt 'cultural' references. No Japanese tea ceremonies or bowing or references to the ancient cultures being best.

The book is crazy, wild, sexy, original and simply fantastic.