I recently got an opportunity to watch the Ketan Mehta film Rang Rasiya. The film is based on the life of Raja Ravi Varma, the famous painter. Since I was impressed by the stunning visuals and the film in general, I wrote a blogpost about it. But then, when one of my friends, Pamir Harvey, raised a question about the film’s plot, I realised I’d written nothing about the plot as such.

Even as I was watching the film, I was wondering about the veracity of its story. I realised I knew next to nothing about the subject. In fact, I did not even know that Raja Ravi Varma belonged to Kerala. I suspected some elements of the movie’s plot were highly fictionalised. I therefore set out to read the book the movie was based on. Raja Ravi Varma, by Ranjit Desai.

As the book was being downloaded on my Kindle, I noticed The Painter by Deepanjana Pal being offered as a reading option by Amazon. As things turned out, I ended up buying this book as well. I wasn’t sure it was about Raja Ravi Varma, so I started reading a bit of it. The first chapter itself gripped me so much, that I found myself hooked to it, and reading it in all the spare time I could find. Which, as such, is not much.

The book starts with the birth of Ravi Varma in Kilimanoor in Travancore district of Kerala. We are carefully painted a picture (pun unintended) of the background of those times. The way families functioned in Kerala, the basis of the matrilineal society prevalent in Kerala of those days. Details about the way children were brought up, the importance of each family member – these are all put out for us to better understand the times that Ravi Varma grew up in.

The background of his family makes us understand how Ravi Varma, born in a little village, had good grounding in the arts. His mother was a poet and wrote operas. His father loved reciting Sanskrit poems that spoke about tales from Mahabharata and Ramayana. He was fluent in Sanskrit and Malyalam.

It was his uncle who recognised the talent in him and encouraged him to learn more. He took him to the Thiruvananthapuram court and gave him wings. The rest was up to the boy himself. Ravi was taken to the court of the Raja to be a consort for the Princess. The Raja dismissed his candidature on the ground that Ravi was 'too dark'. But the Raja did ask the boy to stay in the court and learn painting to his heart's content.


It was not an easy task to learn, the boy soon found out. There were other painters who guarded their craft jealously. More than that, the boy wanted to learn more about oil painting, a medium that fascinated him. Oil painting was brought to India by British painters who had followed the British presence in India. But they too, guarded their secrets jealously. Ravi Varma had to bribe an assistant to the court painter to teach him the secrets of mixing oil paints to get the right color he wanted.

Like Eklavya, he watched, learned and perfected his art. His chance to show his craft came soon when Theodore Jenson visited Thiruvananthapuram in 1868. He was loath (like other painters) to allow a gifted painter to watch him work and learn from his techniques. But the Raja was a fond mentor to Ravi, and he pressurised Jenson into letting Ravi watch him paint. Along with Jenson, Ravi also painted a picture of the King and his beautiful wife, Nagercoil Ammachi.

This was the starting point for Ravi Varma. After a pilgrimage to a nearby temple, Ravi Varma decided to become a professional artist. From there, his life was a series of commissions and untold success.

All through the book, Deepanjana Pal describes the political and social scenario of the times. This helps us to see the man, Ravi Varma, as he was. He was a pioneer in his field. He learned and honed his craft on his own. He had to find ways and means to get further in his profession. His uncle, Raja Raja Varma had grounded him well in how to handle the political situation around him to his advantage.

India was still nothing but a whole lot of kingdoms ruled by major, or minor, Kings. They had the means to make or break an artist. On top of this, Ravi Varma had to deal with the British who ruled India. 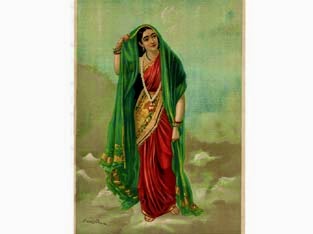 Ravi Varma was known as a gregarious person. He loved recounting stories, going to concerts, attending parties. He was well loved by his friends and they did as much as they could to further his career.

Deepanjana Pal is also a seasoned art critic, and she discusses the major paintings that Ravi Varma
painted at various points in his career. She gives us a fair criticism of the background, strengths and shortcomings of his art. She discusses the effect his art had on people. At no time does she get too involved in the life of Ravi Varma. She keeps herself at a distance and stays non-judgmental. Yet she never makes any excuses for him.

Ravi Varma's wife, Bhagirathi, is a woman in the shadows. There is little to know about her. The couple had five children, two sons and three daughters. As was the custom, Bhagirathi lived in her maternal home, of Mavelikara, while Ravi Varma visited her. Deepanjana surmises what the life of his wife must have been like. Maybe Bhagirathi was a shy, retiring sort of a woman. Maybe she was content to stay in her little cocoon, happy with the visits of her husband, not too bothered to see him going away.

She steers clear of going into Ravi Varma's indiscretions. He did use prostitutes as models, and was supposed to be close to one of them, Anjanabai Malpekar. He was supposed to have had affairs with his
models. She admits that, and moves on.

Deepanjana Pal keeps her style very documentary and matter of fact. She has tried to weave in bits of fiction at times, but that is just to give us a better idea of the happenings, to illustrate the event that is happening.
It is a lovely book that any lover of art, fiction, history, society and politics should read. It is a book that gives us a comprehensive look at the life and times of Raja Ravi Varma.
Posted by Ava at 8:28 am 2 comments:

Kitchen by Banana Yoshimoto
My rating: 4 of 5 stars

This is a book I had wanted to read for a long long time. The price of the book was rather steep and that deterred me from ordering it right away.

I looked for the book in libraries and second hand book shops without any success. Until one fine day I chanced upon an e-book version.

The book came highly recommended and it lived up to the expectations I had built up around it.

Mikage is a young girl who lost her parents very early and lived with her grandmother. When her grandmother also dies, she falls into a sea of despondency. She breaks up with her boyfriend and struggles to pass her days. She finds succor in spending time in a Kitchen. Cooking food, eating and cleaning help her keep her sanity.

Her friend Yuichi helps her by taking her to live with him. He stays with his mother Eriko. Eriko is actually Yuichi's father who is a transgender and prefers to be known as Eriko's mother.

Soon Mikage will have to console Yuichi through very dark times.

The novel is about coping with loss. It is not a cheerful topic. Yet we do not fall into despair while reading the book. The novel works with the idea of dealing with loss instead of falling into darkness, hence it gives us hope, that soon things will be better for Mikage and Yuichi.

The language is beautiful. The story moves lyrically and we are carried along on waves of a beautifully told story.