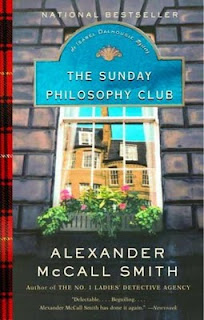 I had long wanted to read something by Alexander McCall Smith having had positive recommendations for the writer famous for his No 1 Ladies Detective Agency series.

Isabel, the protagonist of the series would probably note, isn't a recommendation positive to begin with? Isabel Dalhousie lives in Edinburgh, is in her early forties, is reasonably wealthy and edits The Review of Applied Ethics.  Edinburgh is a quaint town to the south-east of Scotland.  It is famous for its old buildings. Parts of it has been declared a World Heritage Site.  It has a temperate climate which makes it a very good place to live in.  McCall Smith's descriptions of the place are so affectionate and warm that it makes you wish you lived there.  Isabel's age is perfect too.  She is not a giddy youngster skidding through life, she is more settled and more apt to observe and mull upon what she sees.  She does this also because she is a philosopher. Her job brings her in contact with philosophical tracts that she has to edit for the journal - Review of Applied Ethics.  Her comfortable circumstances and single status also give her a freedom to follow her heart.

She is old enough to be an old fashioned girl.  She likes the telephone to be answered in a certain way, she adheres to certain routines and likes good manners in people.  She likes to be very moral and is constantly mulling over whether a certain act is morally right or not. She is also young enough to sometimes forget her own philosophy of life and be rash, outspoken and imprudent.  In fact she usually does something 'wrong' right after she has debated the issue in her mind, which makes it all the more funny. At one time, she does not shy away from following an unpleasent man who is dating her neice, just on a curious impulse.

And, oh, of course, each book solves a mystery.

I read Friends, Lovers and Chocolate first, which is second in the series.  I was a bit undecided about the book, but picked it up anyway.  This is the beauty of a borrowing books from a library.  If you don't like the book much or find it tedious, you can just return it half read. This makes you pick up a book more indiscriminately than you would if you were to buy it.  I read the book as fast as I could, it was that good. It also made me buy the first in the series - The Sunday Philosophy Club.

Isabel and a group of fellow philosophers used to run the Sunday Philosophy Club.  The name of this series is ironical, as the Sunday Philosophy Club is now defunct.  Isabel would like to revive it, relishing the idea of discussing philosophical issues with her friends, but as her two close associates - her neice Cat, and friend Jaime - note, Sunday is not an easy day on which to meet.

The story moves at a gentle pace and is full of delightful descriptions that is reminiscent of Jane Austen. A lady mystery solver is reminiscent of Agatha Christie.  Like Agatha Christie, the mystery is not always earth shaking.  The first novel deals with a possible murder, but the second one deals with visions that a person has. However, unlike Agatha Christie mystries, the mystery itself does not seem central to the plot, nor is Isabel always commissioned to solve the mystery. The mystery seems almost like a sideplot. It is Isabel's philosophical musings that take the centre stage.

It is the general drift of Isabel Dalhousie's life that is so charming.  Her laidback lifestyle, her appreciation of the arts, her tendency to philosophise over even mundane events, her sharp observations, her close friends, all these lay a grip on you and you want to read more and more about her. Isabel is close to her neice Cat, who runs a delicatessan.  Jaime is a musician and a close friend um, pretty pretty close.  Her housekeeper Grace is full of surprises and Isabel finds it edifying to consult her on several matters at hand.  Lovely Edinburgh is always in the background.  It is all these that make the series so captivating. I am listing the books in the series here to prevent you from hitting the wikipedia page, which is shamefully full of spoilers.

The last book came out in 2009 as we can see.  I hope the author continues with the series which would surely delight me.
Posted by Ava at 8:16 pm

I havent yet read this series .. but read no 1 detective agency and tears of the giraffe and liked it .. nice reviews!

Oh this one is really great. I read the No.1 Detective Agency too. It has the same pacing, only the setting is different. No 1 DA reads like a bunch of short stories, but this one is like a novel. REally really Lovely.

I have not read this series either...I should look for it. I recommend the "Dog who came in from the cold"...there's actually a delightful podcast of it, its the latest Corduroy Mansions one!

I would definitely want to give tis author a try!

Flowergirl, I will look for the book you recommend.

hey this sounds so what i would love to read now. I love laidback :)wil pick it up.Your writing itself is so easy and readable - i am probably saying this for the umpteenth time. still, its true

I have been thinking of giving this author a shot, of late. i just put up a post on my blog, too, asking for recommendations about alexander mccall smith's books.

i guess i should pick up something by him soon. your review makes me want to do so. :)

Where art thou disappeared :)

Have you read The goat, the sofa and Mr Swami"? Hilarious and whacky!

This author was recommended to me as well. I think I would love to read this one. I like this old fashioned girl already!

Oh I had already commented on this one. Just realized lol!