Sakoon Singh - In the Land of the Lovers - A Punjab Qissa

Publisher: Rupa Publications
Author: Sakoon Singh
Title: In the Land of the Lovers - A Punjab Qissa

Nanki was orphaned at a young age when her parents died in a car crash. Her maternal grandparents took her in and raised her. They live in a cosy little house in an upper sector of Chandigarh. For those who live in Chandigarh, or know about it, will know that the upper sectors contain the old landed gentry, people of good means. The smaller the number of your sector, the better your location.

Coming back to Nanaki, she is now lecturing at Govt. College of Arts. When Nanaki's college decides to showcase the artwork of a couple of artists, she is appalled to learn that one of these has been promoted out of favoritism. She wants to promote the embroidery work of an acquaintance who deserves to be showcased.  She finds herself rubbing up her superiors the wrong way and is being discriminated against. In the meantime she runs into  Himmat Singh an architect who needs her help in choosing artwork to display in a club he has just finished constructing. She finds herself drawn to him.

Interspersed in the story are the tales of Nanaki's grandmother who had to flee their village in Pakistan during Partition. Her grandmother was then a young newlywed girl and pregnant. She had witnessed her father being killed by his neighbours. Her mother in tow, she had trudged for miles till she reached India to her husband and safety.  Nanaki grew up listening to these harrowing tales of her grandmother and developed an empathy for those in trouble.

I loved Sakoon Singh's descriptions. She takes time to describe everything, the run down college building, a tea shack, a garden, a house. Her magic touch makes us conjure up the picture she paints with words.


The house lay hidden behind dense foliage set off by a row of tall areca palms, their fronds and panicles making for dark silhouettes at twilight. On a day like this, the trees would sway noisily in the breeze, creating a loud rustle against the turbulent sky.

Indian Fiction is, alas,  often a victim of  inconsistent editing which brings down the quality of the book. Here and there, the book was peppered with avoidable mistakes.

Nanaki is a heroine of a kind we need to see more of. She is alive to everything world offers, good, beautiful, bad or ugly. She is a sensitive person who sympathises with people from all walks of life. To be honest, people in Chandigarh are famous for being very affected, conscious of their possessions and status. Rich people like to flaunt brands and go about living brashly, secure in the knowledge that their connections will shield them from harm, even if they commit murder. In such a culture, a heroine like Nanaki is like a breath of fresh air. Her empathy makes her a beautiful person, in and out.

I thought Himmat Singh's story was inadequate. He gets a chapter to himself. I would have liked to see his story run parallel to Nanaki's. If not that, it could have been reduced to a couple of paragraphs. It was neither here nor there to have his story told in some detail but not enough. Similarly Neena, their plump and garrulous neighbour needed more exposure. Neena is so delightfully human and Punjabi. She is devious yet affectionate, intrusive yet caring. I would have liked some more of her story.

Sakoon Singh brings out the favoritism and politics prevalent everywhere, from a college campus to drug rehabilitation center.  She describes the pangs of first love so well. Nanaki has not forgotten her first kiss and still moons over the boy who kissed her, while he has (typically) moved on. We get a wonderful glimpse into the awakened sexuality of Nanaki. Her first intimate encounter was very tastefully described.

Every Chandigarhian worth his salt has made a quick dash to Kasauli (a hill station about 60 kms away). This book, so steeped in Chandigarh culture, has a couple of such trips. I often wondered why there weren't more books based in Chandigarh. I am partially mollified by this book and hope there will be many more that depict this unique City Beautiful.

Sakoon Singh has given us this very evocative novel, set in our times, steeped in Punjabiyat (Punjabi way of life). I will be watching eagerly for her next offering.

Dr. Amit Nagpal - Heroes Amongst Us 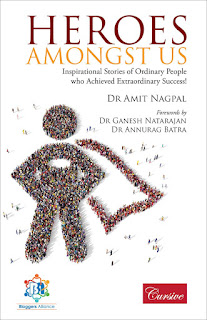 Books on Leadership and Management aren’t really among my favourites. I am not very likely to pick them off a bookstore shelf and read them. However, ‘Heroes Amongst Us’ by Dr. Amit Nagpal was different, especially as it wasn’t about men with ‘larger than life’ personas – millionaires, CEO’s, Forbes Top 30, Times Top 100, entrepreneurs and suchlike – that you read about all the time as perfect examples to be emulated. No, no. The book was about ordinary people like me and you who have gone beyond their limitations to achieve extraordinary success in life. It was, for this reason, different from any other book in non-fiction that I have read so far.

To start with, the blurb set my expectations really high and I wasn’t disappointed at all. The book presents all the stories with lucidity and grace. Highly recommended for times we are facing now, for it leaves its readers with a message of hope and faith. The author has profiled about 32 people from different walks of life who have gone past obstacles to achieve their dreams and be a force for greater good. Each story has a common element of ‘struggle’ and it ends with a strong message that portrays the triumph of human spirit. The stories are heart-warming and inspirational.

One that particularly stands out is the story of an army man turned Buddhist monk, Bhikkhu Sanghasena. Sanghasena joined the Indian Army at a tender age of seventeen, but soon left it to pursue a higher calling. He became a disciple of the renowned Buddhist monk, Venerable Acharya Buddharakkhita Mahathera, the abbot of the Mahabodhi Society Vihara, Bengaluru. And soon after receiving full ordination, Venerable Sanghasena undertook Dhamma studies and practiced Buddhist meditations of several types. Later, he started the Mahabodhi Residential School, an educational institution in Devachan, Leh, and founded the Mahabodhi International Meditation Centre (MIMC) in Ladakh. It was fascinating for me to read about him and how he undertook numerous daunting activities in the harsh climate and unfavourable terrain of Ladakh. Sanghasena was honoured with the ‘World Peace Award’ in 2004 by the Gandhi Peace Foundation, India, in recognition of his work for world peace, inter-faith service and inter-religious harmony.

Among other stories, one that I found very interesting and relatable was the story of Murtaza Ali Khan. I met Khan at an event in my city and didn’t know anything about his humble beginnings. Khan is a renowned film critic, a famous columnist and one of India’s top film bloggers. He lost his father at an early age, and was faced with a tough choice – whether to pursue his passion for writing or to follow the wishes of his family. He chose the latter. However, after years of spending his life in an office as an IT professional, he realised he wasn’t cut out for it. His calling was different. It wasn’t easy to step out of his comfort zone but after several years of hitting against the wall and facing rejections, he finally made it. Khan is a prolific writer and has thousands of fans in the country. ‘I think it is all about self-belief and taking the leap of faith at the right time. If you do it too early, then you might miss your mark. Also, you don’t want to be too late and miss the bus,’ he says in the book. Fascinating!

There was one more story that deeply touched me, this one was about Rajeshwari Chauhan, a bestselling author who hails from the royal family of Chhota Udaipur. Dr. Nagpal has crafted a compelling introduction for Chauhan in the following words: ‘Rajeshwari’s story is that of a Cinderalla in reverse…from blingy ball room to a dingy studio; from high heels, pearl strings and shimmering chiffons to faded jeans and paint stained shirts; from designer perfumes to turpentine fumes. And all of this was by choice.’ He then goes on to describe how this rich princess faced all sorts of adversities and finally managed to achieve success in her life. He ends this story with Chauhan’s success mantra: ‘To keep the bonfire blazing and ambers aglow, we need to feed it with positivity.’

There were a few other stories that struck a chord, that of Manish Tyagi, for instance, a Commander of the Indian Navy who decided in 2014 to be a stand-up comic and never looked back. Or that of Amandeep Thind, who postponed his decision to commit suicide and never regretted it; Thind is one of the top motivational coaches in the team of internationally renowned speaker Tony Robbins. I also found Faisal Hoque’s story very interesting, especially as how this janitorial engineer eventually went on to raise millions of dollars for his businesses.