The Citadel and The Judas Tree are the magnificent novels that introduced me to AJ Cronin.   A J Cronin was a doctor till an illness required him to be idle for six months at a farm, taking complete rest.  During this time, he wrote a novel which as an immediate success.  This set him on to writing as a career, abandoning his medical practice. 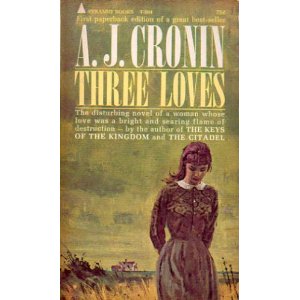 Three Loves, his novel about Lucy Moore, charts the life of the lady from her happy married life to her sad end.  At the begining of the novel, Lucy Moore is a young married woman, devoted to her husband, home and child.  She is imperious, and often tries to influence her husband Frank, unduly.  However Frank is happy to be tethered to Lucy until his cousin arrives on the scene and suggests that Lucy is bossy.  Anna has been invited by Lucy to spend a few days with them.  But she turns out to be a colourful woman, Lucy on learning this, begins to beset by doubts of relations between Anna and Frank.  It upsets her happy existence and culminates in her husband's death.  From here on, her life goes into a downward spiral and her only hope and happiness lies in the hands of her son, Peter.  After Peter she latches on to her love of God for succour.

The novel charts all that is pitiful in the life of a woman who is dependent on others for happiness.  All is good for the woman who is safe within her chosen sphere, as long as she chooses to be subordinate to the man, even if she rules from beneath.  Eva is happy as long as her husband Richard - Lucy's brother - is around to provide for her. Polly has accepted her brother's charity and is happily overfed. It is when Lucy is forced by circumstances to be independent, that she faces hardships.  Her brother and brothers-in-law abandon her to her own devices, being too selfish to help her.  She is forced to take up a menial job and pinch pennies mercilessly in order to put her son through a good school and a college.  At the end of her labour, she finds no solace.

Though the men in her life often try to put her down and make her feel that it was her own poor judgement that caused her downfall, it is evident to the reader that all these people who never lifted a finger to help poor Lucy had no right to judge her.  The world is quite like this, there are very few people out there who will help you, there are many who are ready to stand by and judge.

There are many shades of his own life in the novel.  His father, a travelling salesman, had died early from tuberculosis.  His mother also worked, like Lucy Moore, unlike the other women of her times. Lucy Moore put her son through medical college, Cronin also was a doctor. How autobiographical this novel is, however, it is hard to tell.  But it is clear that AJ Cronin had an intimate knowledge of the mind of men and was privy to how it is that our failings and strengths make us what we are - human.

The book is hardly a barrel of laughs, the subject makes it a grim study, as poor Lucy finds hardly any reprieve in life. It is magnificently written and very incisive, sharp as a surgeon's knife. I have resolved to find as many of Mr. Cronin's books as I can find, and read them all.
Posted by Ava at 8:46 pm 6 comments: